Trinity Canyon has 4,5 ha of own vineyard in Vayots Dzor region. The main areas are located on the plateau Aghavnadzor at the altitude of 1 300 m above the sea level. The density of plantation is 3 000 vines per hectare. The vines are from 4 to 14 years old. Some more plots are taken for long-term lease. The most interesting of them are situated on a slope directly opposite the historical Areni-1 cave. Only 0,8 hectares, but with a good perspective. The exposition allows the grapes to ripen even during cool autumn. Trinity is the only project in Vayots Dzor with international grape varieties. In this farm they experiment with Cabernet Sauvignon, Syrah, Chardonnay, Merlot (saplings are imported from phylloxera free Cyprus). Traditional for this region Areni Noir and Voskehat are neighboring to the international varieties. Rare varieties are purchased from individual vineyard owners for experiments, such as Nazeli, Qrdy and Khatun Kharji.

In 2016 the construction of a small own winery in Aghavnadzor near the vineyards was over. Today Trinity is one of three wineries in Armenia, experimenting with wines fermented and aged in amphoras-karases. For experiments, some amphoras are dug into the ground at the very neck, and the two largest ones are left in the winery walls in open form on special stands. Red wines are aged in barrels of French and Armenian oak. Part of the project’s wines are produced at Semina Consulting winery in Yerevan.

One of the Trinity co-owners Hovakim Saghatelyan directly leads the project. His friends, businessman Vahe Balulian and restaurateur Andranik Grigoryan, help with the marketing and strategy of the project. The agronomist Levon Hakobyan is engaged in the vineyard. Winemaking is supervised by Artem Parseghyan, a graduate of the University of Enology in Geisenheim (Germany).The individual experiments of the project are assisted by the specialist in organic winemaking Jean Luc Isnard. Mariam Saghatelyan is promoting wines. 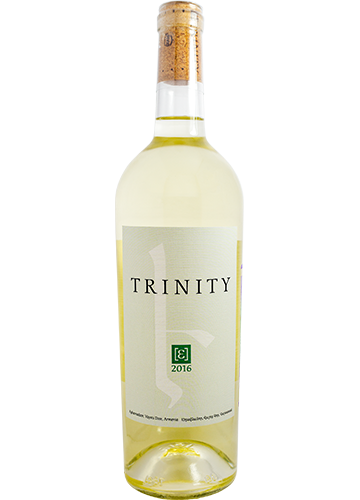